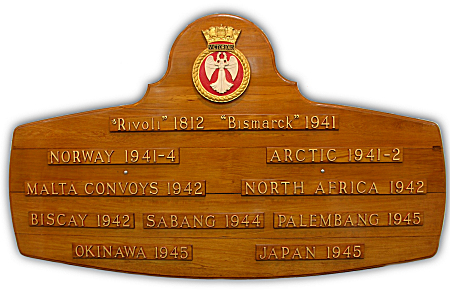 Honours board of the WW2 aircraft Carrier HMS Illustrious 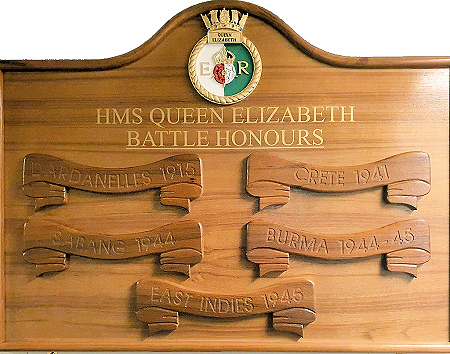 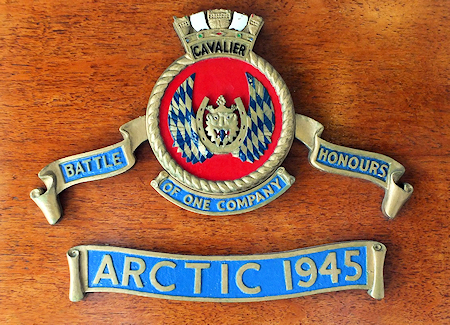 Honours board of the WW2 destroyer HMS Cavalier.

What are they and why they are awarded?

Battle Honours awarded to HM ships and Fleet Air Arm squadrons are intended to foster esprit de corps among the ships companies and so take a personal interest in the wartime exploits of their ships and past ships of the same name. They are recommended by the Battle Honours Committee to the Navy Board. Battle Honours are awarded for successful war service, not just a record of service.

In a similar fashion to the Ship’s badges, there was no official authority or list of approved Honours before 1954 when a new body, the Battle Honours Committee was established to advise the Navy Board of the Ministry of Defence on which are official Honours. The first official list of Battle Honours was promulgated by Admiralty Fleet Order (AFO) 2565/54 dated October 1st 1954. This also set out criteria for the awards and listed them. New Honours have been added over the intervening years, similarly promulgated by AFO and later Defence Council Instructions (DCI).

The Battle Honours Committee comprises of the head of the Naval Historical Branch plus a senior officer from the staff of the Second Sea Lord, they laid down the criteria to merit an award. These included:

Additionally, the following general rules are followed, but exceptions may be allowed.

The key criterion was success; there would be no battle honour for a defeat – or an action which was badly fought.

Honours are awarded for six types of action:

The first honour granted was for ARMADA 1588. A Fleet Action during the War with Spain 1588-96, the earliest naval action for which there was sufficient documentation, although it pre-dates the Royal Navy per se.

The most recent award is AL FAW 2003. A Combined Operations action during the Second Gulf War in Iraq.

The Invincible-class aircraft carrier HMS Ark Royal had the honour of wearing both the first and latest Battle Honours.

The Battle honour board

As warships do not carry regimental colours, battle honours are instead displayed on a battle honour board. This is usually a solid wooden board (traditionally teak) mounted on the ship's superstructure, carved with the ship's badge and scrolls naming the ship and the associated honours, and either left completely unpainted, or with the lettering painted gold.

Boards can be any size, from displaying a single Battle Honour to the very large displaying multiple Honours; HMS Warspite holds the record for the most Battle Honours. 25 in all: 15 of them earned by the 7th ship to bear the name, a Queen Elizabeth Class battleship serving in both WW1 and WW2:

The battleship’s 30 years on active service pre-date the use of the Battle Honour board but when the name was reissued for a Valiant class nuclear powered submarine launched in September 1965 her impressive list of Battle Honours was compiled and a board was constructed.

The actions and campaigns listed as Battle Honours are displayed on a scroll, mounted in a suitable position in the ships which are eligible for the Honours. Battle Honours are normally shown in BLOCK LETTERS, with Single-ship and Boat Service actions listed in lower case between inverted commas. This allows the distinction between a Fleet Action named after a place and a single ship of the same name. e.g. CHESAPEAKE 1781 and 'Chesapeake' 1813. Battle Honour Scrolls taken from ships being sold are stored for use in other ships of the same name.

Naval Aviation was in its infancy in WW1 as the Royal Naval Air Service, and despite serving with distinction during the conflict no squadron was awarded a Battle Honour. The force merged with the Royal Flying Corps to form the new Royal air Force on April 1st 1918. The Admiralty regained control of is air arm on May 24th 1939; now called the Fleet Air Arm it received its first Battle Honours that year with the outbreak of the Second World War.

Two Fleet Air Arm squadrons, 845 and 847 were awarded the latest Battle Honour AL FAW 2003 for their part in Operation Telic, a Combined Operations action during the Second Gulf War in Iraq.

Royal Navy Battle Honours - By Date also by honour alphabetically. A comprehensive list of all Battle Honours with an explanation of each pplus all units involved in the action.