Both St. Dunstan’s and Roedean School were easy targets for enemy aircraft and their proximity to the beach also brought the threat of attack from a U-Boat landing party and regular defence exercises were held. Armed sentries patrolled the perimeter of the site day and night, whilst the duty watch manned sentry posts at entrances. The various instructional sites in the town also had sentries posted, a duty which fell to junior rates at the establishment - at least once during their time there, trainees being utilised as security manpower when not under instruction. The threats of attack from a U-Boat landing party was taken seriously, and regular exercises were held against this eventuality- luckily none ever materialised. During early 1944 the Army Divisional Commander, Lieutenant General Montgomery, visited VERNON to give advice on the defences; he had a few words for the VERNON civilians who he had encountered when they were on Home Guard sentry duty. 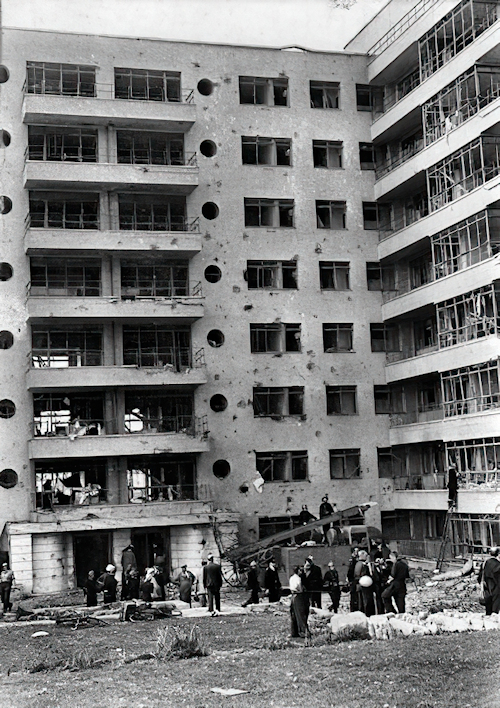 ‘Tip and run’ aircraft attacks: No U-Boat attacks happened but the two sites were occasionally harried by aircraft. These were ‘tip and run’ aircraft attacks during which machinegun rounds and cannon shells caused some casualties. The worst of these attacks happened in October 1942 when one rating attending an electrical course in the St. Dunstan’s building was killed as he sat in the canteen. Able Seaman Electrical Mechanic, C/MX 97093 Ralph Jordan was killed by a single stray bullet; he was buried locally in Brighton cemetery. Another rating, Able Seaman Henry Coates, was seriously wounded during a hit-and-run raid by a lone Messerschmitt; he was hit in the thigh by a cannon shell. It’s not clear at which site the injury occurred but the shell failed to detonate and a surgical team from the Royal Sussex County Hospital successfully operated to remove the live round, he made a full recovery in hospital.

Bombing raids: The only VERNON site to suffer bomb damage was the accommodation at Marine Gate, a block of 120 luxury flats that stands next to the gas attenuators at Black Rock. The building was partly requisitioned, flats which had no private tenants were used as accommodation for naval personnel from naval units in the Brighton area. The block is very tall and very white making it an easy target, it was attacked by enemy aircraft more times than any other structure in the town. On June 26th 1942 it was hit by 22 shells fired by two Messerschmitt Bf 109 aircraft in an attack lasting just 15 seconds; it was further damaged by fire from a gasometer which exploded at the same time.

More serious damage was done on August 28th 1942 when the block was again strafed by machine gun fire and was hit by a single bomb. The explosion killed one resident, Miss Claudette Mawby (one of The Mawby Triplets), she was blown to the bottom of the building's lift shaft by the blast. She had moved into the building only three days earlier.

The most damage was received on May 25th 1943 during Brighton’s worst Air Raid. At just after noon, Captain Egerton, who was due to be relieved by Captain Harold Morse, RN DSO on June 4th, was on the Quarterdeck along with the ship’s officers gathering for a group photograph to mark his leaving. While the assembled officers were being lined up for the shot the air-raid siren went off. No one took any notice until they saw about a dozen planes flying due west, below the level of the cliff at wave top height, heading towards Brighton. The group scattered as another dozen aircraft which had approached the back of the school over the downs roared over them; these were so low that the colour of the bombs in the racks could be clearly seen. There were a few cannon shells fired as they sped past but no casualties were incurred at Roedean school.

Four bombs were aimed at Marine Gate. The first missed and passed through one adjacent building and exploded in another, just missing some workmen. The second hit the building at fourth-floor level destroying three flats; a third bounced off a patch of wasteland and passed through a nearby house before cutting right through Marine Gate to explode on the road outside; the fourth exploded at the southeast corner at ground-floor level and broke every window in the building. There was also fire damage from another explosion at the nearby gasworks. No residents died, but many were injured. The daylight raid by 25 enemy aircraft was over in just six minutes, twenty-four people died and over 130 were injured in Brighton. During the raid the Preston Park Pullman Workshops were damaged and the London Road viaduct was also hit bringing south coast rail traffic to a halt and several residential areas were hit by bombs. One attacker, a Focke-Wulf 190 was shot down by 8 Battery, 2 Canadian Heavy Anti-Aircraft Regiment sited on the Roedean golf course just west of Roedean School, the aircraft crashed into the sea at 12:22 pm.

TThere was one fatality from amongst VERNON's personnel when Mr. Percy Shakespeare, a celebrated artist from Dudley working for the RN as a civilian draughtsman, disappeared. Percy was walking alone on the cliffs at the time of the attack but never returned, it was presumed that he had fallen into the sea in a freak accident and drowned. After this attack, all Marine Gate residents were evacuated and the building was left unrepaired. During a night raid on February 23rd 1944 one of several bombs dropped caused more damage to Marine Gate..

‘Doodle bugs’ the other airborne threat to approach from the sea was the V1 “Doodle bugs” or “Buzz bombs” which began to fly over from northern France beginning on June 13th 1944 only days after the Normandy landings. Their reign of terror was short lived however; the last launch site was destroyed in October 1944. Although none fell to earth at any VERNON site (one did fall on Saltdean, 2 miles up the coast) they were often observed flying overhead on their way inland. Many naval ratings saw their first V1 through the windows of the St. Dunstan’s building which offered an exceptional vantage point from its glass fronted ‘cockpit’. A Lewis machine gun was mounted on top of St. Dunstan’s and manned when V1s were heard in the hope of a lucky hit knocking one off course or destroying it. 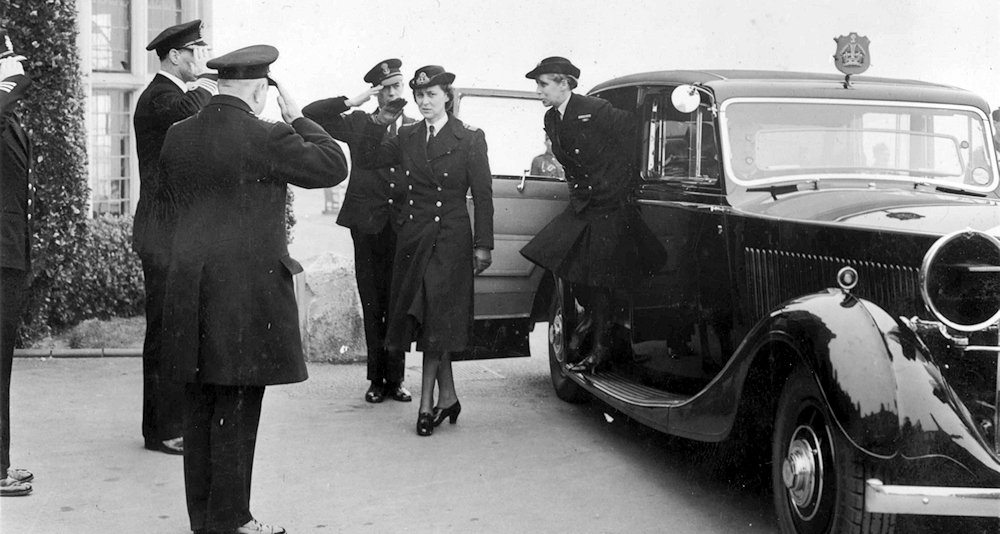 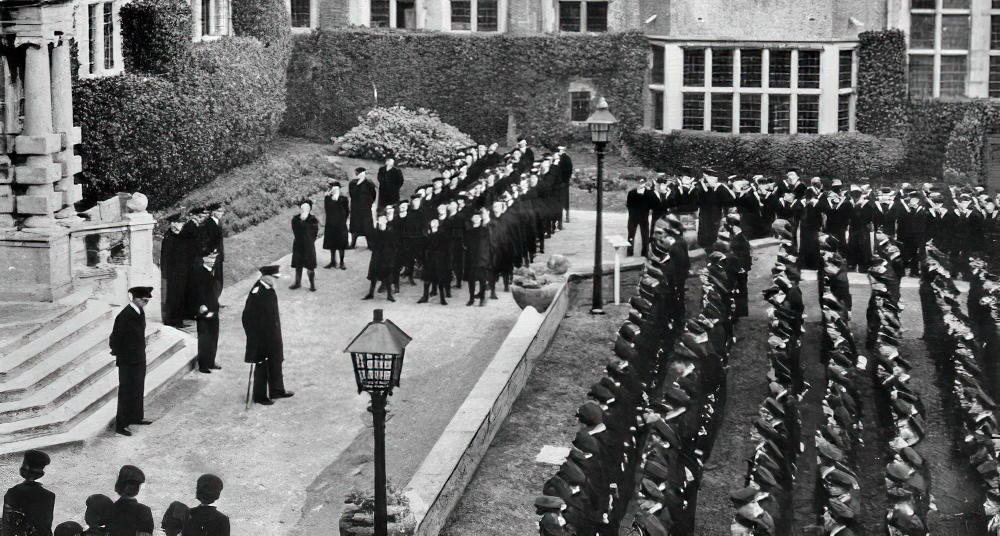 Left: Captain H. E. Morse, RN DSO greets HRH Princess Marina of Greece, Duchess of Kent, on her arrival at Roedean in March 1944. She was attending in her capacity as Chief Commandant of the W.R.N.S to inspect the Wrens. Photo: courtesy Mr. Nick Lade. Right: The Captain addresses the men & women of VERNON (R) during divisions. Photo: Lt Cdr Rob Hoole RN.

On June 6th 1944, D-Day, the flagstaff flew a No.1 White Ensign (a 9 x 11 ft flag) in honour of the men about to land on the Normandy beaches, those who were there on that day remember seeing wave after wave of ships going down the Channel on their way to France. Captain Norman Grace, who took over command of VERNON in September 1944, presented the Ensign to the Head Mistress of Roedean School when VERNON moved back to Portsmouth, and this was hung in the School’s chapel in a place of honour. 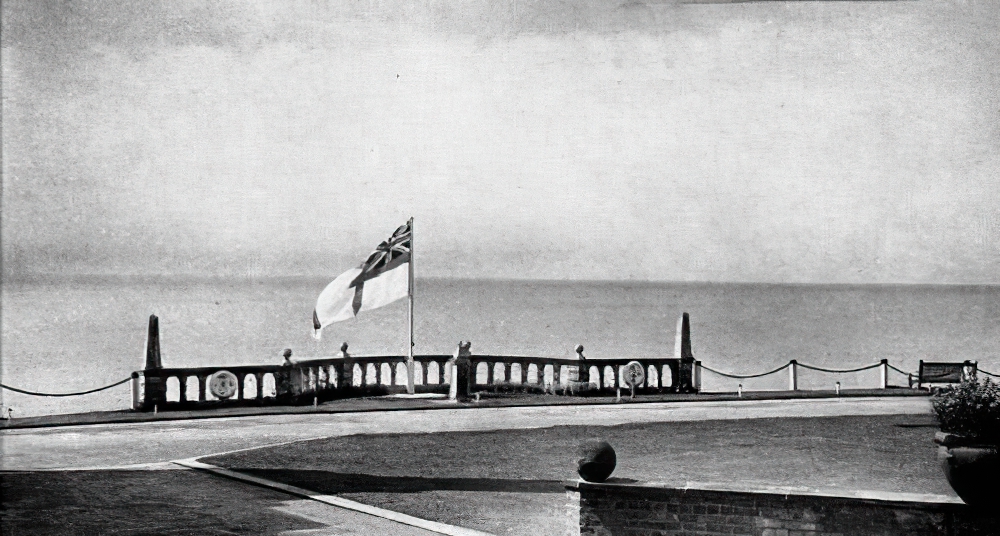 The no.1 White Ensign flying from the Quarterdeck flagstaff at Roedean with the quadrangle/parade ground in the foreground.
The English Channel fills the the background. Photo: Lt Cdr Rob Hoole RN

May 8th 1945 marked the end of the war in Europe and both Roedean School and HMS VERNON turned their attention to returning to normality. The need for dispersed military bases and schools and children evacuated from the densely populated areas of war-time Britain had come to an end.

June 7th 1945, was the last day of naval instruction at Roedean. HMS VERNON began the move back to Portsmouth the next day; the operation involved ninety-two 5-ton lorry loads and was completed in just over a month. By mid-July the various sites occupied around Brighton and Sussex were being cleaned up and prepared for return to their civilian owners. Roedean was reopened as a girls' school in January 1946.

Noyr: Captain Egerton and Captain Morse both retired in the 1930s with the rank of Rear Admiral and returned to active service at the outbreak of war with the reduced rank of Captain. All three officers were to hold the position of Naval ADC to King George VI.

The no.1 White Ensign  still proudly hangs in the school chapel.
Photo: Courtesy of Tony Mould, My Brighton and Hove Community Website

Rowland, D. (2003) 'Out of the Blue: The story of Brighton's worst air raid ' Brighton, Finsbury Publishing

No comments yet. Be the first!