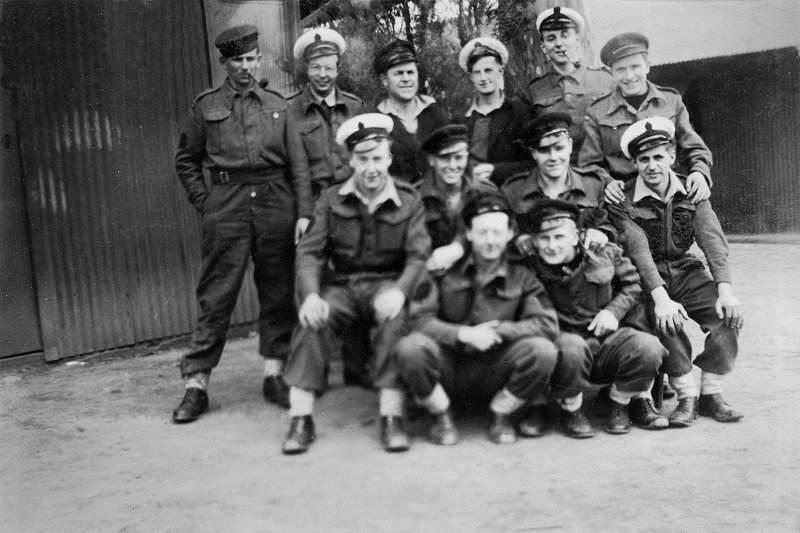 Geoff was drafted to H.M.S. GOSLING, R.N. Air Establishment Risley in February 1945 to join the first Mobile Repair unit to be assembled. He remained with this unit until returning to the UK in December 1945 after the unit was disbanded at RNAS Nowra, New South Wales, Australia.

Early February 1945, at HMS WAXWING, I was one of a group of some 20+ fitters and mechanics who received a foreign draft to M.R.1, an unheard of unit. We travelled to H.M.S. GOSLING camp 3 and joined others to complete the unit and to be instructed of our duties. We had the usual medical, documentation, injections etc. and were then issued with our new uniform, - khaki battledress. Three weeks later we were put on a train to Seaforth Station Liverpool, marched to Gladstone Dock and joined the Canadian Pacific Liner "Empress of Scotland" for a journey to Sydney, Australia.

My boarding card tells me I was on E deck, no.2 section; I was no. 156 and 3rd sitting for meals. E deck was below the waterline, illuminated by electric lights and completely devoid of fresh air. Bunk beds 4 tiers high dominated the deck with some 3ft between bunks, side by side, and 5ft, head to feet, this being the main gangway to traverse the deck and get to your bed space. We lived out of our steaming bags. Fresh and stale cigarette smoke hung in a blue and yellow cloud polluting the atmosphere, while the temperature soared into the 90s and, in the tropics, into the 100s. Conditions, to say the least, could have been better.

With having no duties to perform, routine and boredom had to be battled against. A typical day's routine would be; Reveille 6.30 a.m. Ablutions 7.00 a.m. - 7.30 a.m. when we had a supply of fresh water, (and again from 4.00pm. - 4.30pm.). Queue for breakfast return to mess and prepare for daily boat stations. Boat stations could last for anything up to 2 hours, and then we would retire to the canteen for "stand easy". Find a sheltered spot and play solo whist or nap until it was time to queue for dinner.

During the afternoon, Tombola would be played and there would be a film show in the cinema or we would continue our card school. We may even take a salt-water shower with the salt-water soap with which we were issued. Queue for supper and then to the casino (sorry-canteen). The canteen was one great gambling den. Everywhere were schools of poker, pontoon, banker and crown and anchor, with money changing hands as if there were no tomorrow. Gambling was completely "out of bounds" but who cared? Then retire to your bunk and await a new day but the old routine. Food was not of good quality or quantity with plenty of reconstituted dried egg, dried meat and dried potatoes with little variation. But we survived! Approaching the Panama Canal we met a badly damaged American destroyer on its way home, with numerous "rising suns" painted on the smokestack. We gave them a cheer and they responded and we wished them "good luck".

Exiting the canal at Balboa, we gazed at the illuminations along the coast, forgetting that Panama was neutral, and failing to realize that we were silhouetted against this backdrop and a sitting duck for any lurking submarine. At this time I met LAF (E) Ron Collacott at the dinner table. 'We worked as office boys in the same office at a chemical factory before the war, and were good friends. During the whole of the voyage that was the only time we met, an indication as to the number of troops on board.

After 2 more weeks we arrived at Sydney on the 9th April, disembarked on the 10th April and headed to H.M.S. NABBINGTON, R.N.A.S. Nowra to begin our tasks. Unfortunately H.M.S. NABBINGTON wasn't ready for us.

Because of heavy rains and air traffic the runways required re-laying and air activities were transferred to the Jervis Bay airstrip, so there were no aircraft to service or repair.

Living quarters were very basic. Long Nissen type blocks each containing some 40 ratings and having 4 tables and 8 forms. Concrete floors, which, when swept, deposited clouds of cement dust everywhere, and that was it! We lived out of kitbags. One of the first jobs we did was to make wooden shelves to fix over beds to put photographs and small personal items on. We worked on the inside of the cinema fixing a stage, put a fence around the football pitch, in fact anything to keep idle hands busy until we could resume our trade.

We began to receive aircraft in mid April so we were back in the business for which we were trained. The C.C.C. (civilian construction corps) was still erecting living quarters, laying ditches for drainage and other construction work. In the evenings they organised "two-up" schools which were ''out of bounds" to us, but we would go across anyway. The "heads" and ablution blocks were very primitive. Two lines of open plan toilets, with only a newspaper to hide ones embarrassment, but modesty soon disappeared. It was the same at the showers.

Considering the amount of air activity, our safety record stood up well. We lost an Avenger, which turned upside down on landing; a Corsair, which lost part of its undercarriage on landing, and a Wildcat, which burst into flames on take off. Fortunately not one crewmember was seriously injured. We did suffer a fatality when a Corsair crashed in the bush and burst into flames. When the rescue party arrived on the scene it had a hopeless task. And this in the last week of the war.

The people of Nowra warmed to us and we received invites to social events, dances and into their homes for evenings, weekends or longer. Many friendships developed, our V.E. celebrations included inviting them to an “open house” and many families and children, enjoyed our hospitality.

We were given 14 days leave and LAF (A) Les Samson and I had a few days in Melbourne during the victory celebrations, before visiting Canberra and returning to Sydney and the wonderful beaches.

With the dropping of the atomic bombs and subsequent cease-fire, we had the painful task of servicing aircraft only for them to be flown to an aircraft carrier off Sydney and pushed over the side into the Pacific Ocean . They were American aircraft and "lease lend" was now over and they didn't want them back.

During October we were given the good news that we would be leaving shortly and on the 4th November we bearded the R.M.S. ANDES for our journey home. Conditions were very much better. We were above the waterline with portholes and much more space, better food, constant fresh water, more entertainment, far fewer restrictions and even duties to perform, mine being corridor patrol on the civilian deck. Our voyage home took us to Fremantle, where we had a day ashore, then to Bombay, where we had two days ashore, through the Suez Canal with the bum boats offering their wares of baubles' bangles and beads, before passing the Rock of Gibraltar and on to Southampton where we arrived on 4th December.

In Bombay we called at a C of E Mission that invited us in for tea, cakes and a chat. While talking to the priest he posed the question as to where we lived in Britain . When I replied Runcom, he asked if I knew Cannon Perrin, the senior clergyman in Runcom. This was a remarkable coincidence. On my draft leave my fiancé and I decided to be married, but as we were under age needed a special licence and it was Cannon Perrin who supplied and signed the licence for us. It's a small world!

From Southampton we went to H.M.S. DAEDALUS III, Bedhampton Camp and on to enjoy 14 days leave. On return from leave I was posted to H.M.S. BLACKCAP at Stretton. I couldn't have chosen better for I lived only 10 miles from camp. Eventually I was granted permanent week-end leave and L & PA and commuted from home until my demob on 16th May and final discharge in June, --- I'd survived! It was a good feeling.